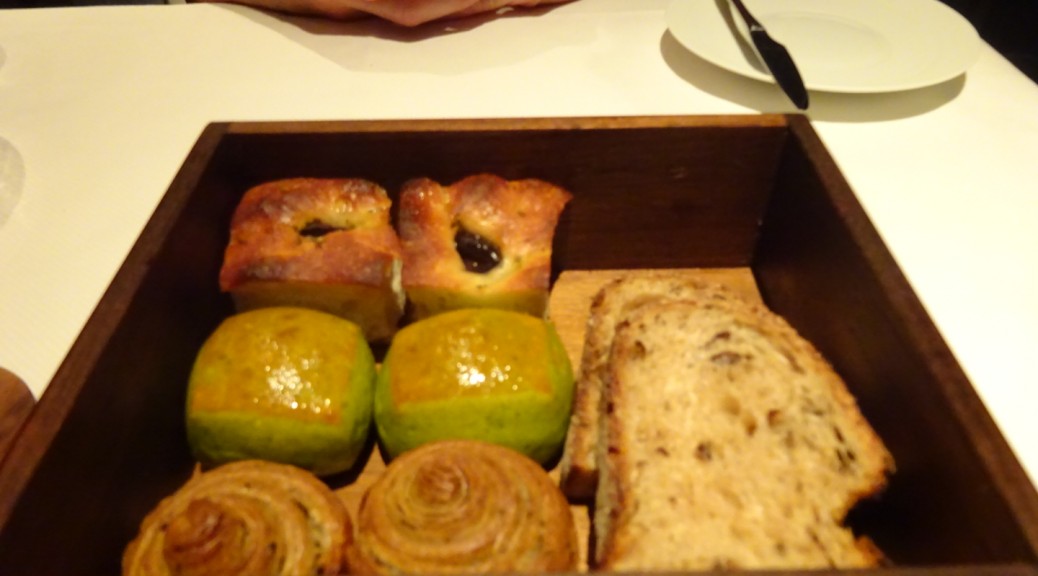 Last Friday Jack surprised me with a celebratory dinner at Quince to toast my upcoming move to a new position at work. I had been to Quince once back in 2007 when it was located in Pacific Heights (that site eventually became Baker and Banker, and now Octavia). In 2009, chef/owner Michael Tusk moved Quince to its current location in Jackson Square, and began serving a more formal prix fixe tasting menu. Soon afterwards, he transformed the adjoining space into an Italian restaurant named Cotogna (which means “quince” in Italian), which serves a similar menu to the one previously served by the old Quince.

Quince is no stranger to accolades, and it currently possesses two Michelin stars. From the moment we walked into the restaurant we were impressed by the quality of service, ambiance, and food that made up our dining experience. The dining room has a welcoming and elegant decor, with warm floor to ceiling curtains and exposed brick walls. Quince is definitely a “special occasions” spot.

Jack and I both started with cocktails, and they were gorgeous and delicious. Jack had a whiskey-based drink which had gold leaf in it, and mine was a refreshing gin-based cocktail that was equally beautiful. They were both well-balanced and delightful.

We ordered the prix fix menu and added the Tajarin pasta, which was one of the supplemental menu items highlighting the Tartufo Blanco (Italian white truffle), which we were told was in season. We also added the wine pairing. Before the first course came out, our server brought the white truffles by our table so we could experience their aroma; it was heaven.

Our first course was a collection of canapés. Everything was delicious, but the steak tartar stood out, as it had a nice crispy exterior that paired nicely with the cold, seasoned steak in the middle.

The second course was the caviar course. We declined the optional supplement which was a Golden Osetra Caviar Panna Cotta (which was tough, as you know how much Jack loves panna cotta!) and we enjoyed instead the Tsar Nicoulai Reserve Caviar which was served with Santa Barbara Sea Urchin and Brioche. Both preparations were amazing. I’ve never met a toasted buttery bread that I didn’t love, and this brioche did not let me down. The sea urchin came in two forms: the classic “tongue” or body of the urchin, as well as an urchin mousse underneath.

The third course was the California Sturgeon with Ruby Beet, Horseradish, and Rye. When our server brought this dish to us, there was a little lid on top that was filled with smoke. When she lifted the lid, the smoke was released and gave off a smokey fragrance that whet our palates for the smoked sturgeon fish. This was eaten atop thin crispy rye toasts that were elegantly displayed in the center of the table.

The fourth course was a small taste of Monterey Bay Whelk served with Kelp, Nori, and Meyer Lemon. I’m a sucker for any dish served with fresh lemon, especially Meyer lemon. This item was light and refreshing. It was followed by a delicious Marin Miyagi Oyster with Bloomsdale Spinach, Roe, and Vermouth.

Our sixth course was the Farm Egg served with Porcini mushroom, Perigord Truffle, and Vacche Rosse Parmegiano Reggiano. I pretty much always enjoy a soft-cooked egg, and this was no exception. It was rich and comforting.

The original Quince (and now neighboring Cotogna) was known for its Italian fare, so we were not surprised to find several pastas on the tasting menu. I love me some fancy pasta, and I enjoyed each pasta course at Quince more than the one preceding it. The first pasta was a Tortelli (stuffed pasta) with Red Kuri squash, Lapsang Souchong (a Chinese black tea), and Colatura di Alici (an Italian fish sauce made from anchovies on the Amalfi Coast). It was also decorated with gold leaf. This was INSANELY good.

Let’s take a moment to talk about gold leaf, as we’ve now seen it twice on the menu. I’ve always been perplexed by metallic food, the most prevalent being the gold flecks found in the cinnamon flavored liqueur Goldschläger, as well as those little silver sprinkles (dragées, pronounced “dra-zhayz”) used to decorate cookies and gingerbread men. Based on a quick internet search, the USDA considers metallic dragées to be inedible and for “decorative purposes only” (then why do they taste like sugar?) Apparently they are sold in all 49 states except California. Gold leaf, however, is considered safe to eat, as long as it is as pure as possible (22-24 carats). Gold is considered “biologically inert,” meaning that it passes through the digestive tract without being absorbed.

Now, back to the tasting menu. At this point they brought out one of my favorite accompaniments to any tasting menu: the BREAD. I had one of each.

The next course was Brodo (“broth” in Italian) with Onion, Black Garlic, and Wasabi Flower. We drank it like hot tea and it had a rich, salty umami flavor.

Course number ten was Fagottini (stuffed pasta) filled with Fontina cheese from Valle D’Aosta (a region of Italy near Piedmont), topped with crispy Jerusalem Artichoke. This tiny dish was a knock-out. I’m usually not a huge fan of Jerusalem artichokes (aka “sunchokes”), but these were heavenly. They were crispy and basically served the same purpose as pancetta. This would be a nice trick to try when serving a vegetarian pasta dish at home.

The next pasta course was Tagliatelle di Grano Arso with Venison, Celery Root, and Pomegranate. Grano arso means “burnt grain,” which is a flour made of roughly one part toasted grain, and three parts raw grain, that originated in southern Italy. As I’ve mentioned before, tagliatelle is Jack’s favorite pasta shape, and we both enjoyed this dish immensely. The pasta looked like it could have been colored with squid ink, but it also had a nutty flavor that was clearly due to the toasted grain.

At this point we were served the supplemental Tajarin (pronounced “tie-yah-REEN”) pasta, served with Italian white truffles. The word tajarin means “tagliolini” (a thinner tagliatelli) in the Piedmont dialect. The truffles tasted and smelled sooo good. When we were halfway done with this dish, our server came around and shaved more truffles onto our pasta. It was so decadent.

This is the point in any wine pairing where I look up and realize that I have several glasses of wine in front of me. The pours were very generous and way too much for me to drink in one night. Luckily Jack helped me out.

Our thirteenth course was Liberty Duck with Black Trumpet mushrooms, Turnip, and Endive. I have to admit that I’m not a huge fan of duck. It’s grown on me over the years, but I still would much rather have a piece of steak. But I’ll admit that it was quite tasty.  While we were eating the duck, our server stopped by and offered us each a skewer that contained a small piece of duck heart, liver, gizzard (the bird’s stomach), and roasted onion. I am not a lover of organ meats – I just can’t get past the “ick” factor. But here they were in front of me, and I knew they would be tossed out if I did not accept them. So I took a small bit of each and I found the heart to be chalky, and the liver and gizzard to be too fatty. The onion was delicious, though!

Our first dessert course was a Blood Orange sorbet with Honey, Ginger, and Kataifi (a Greek pastry that resembles shredded wheat). It was light and refreshing, and the texture was perfect. This was followed by the Meringata with White Truffle and Piedmontese Hazelnut. It was kind of like an upscale baked Alaska filled with TRUFFLES. It was off the hook.

As if our stomachs could hold anything else, our server came by with a cart full of Mignardises (bite-sized desserts) including macarons, small cakes, candies, chocolates, and sugared blueberries. Once we had paid our bill and collected our coats, we were served yet another dessert: homemade hot chocolate “to go.”

Before I conclude this review, I want to share a funny anecdote about the bathroom decor at Quince. There was a yellow glass chandelier in each of the unisex bathrooms, and I initially was convinced that they were pieces by Chihuly. Jack eventually convinced me that this was ridiculous; but we got a chuckle at the thought of the dining room decorator relegating two expensive Chihuly chandeliers to the bathrooms because they did not fit the design motif of the rest of the restaurant!

Our meal at Quince was fabulous and special. Hopefully the photos speak for themselves, but the food was insanely good. It was definitely a pricey way to spend an evening, but I firmly believe that some experiences are worth splurging on; the dinner may have only lasted a few hours, but we will remember it for a lifetime.