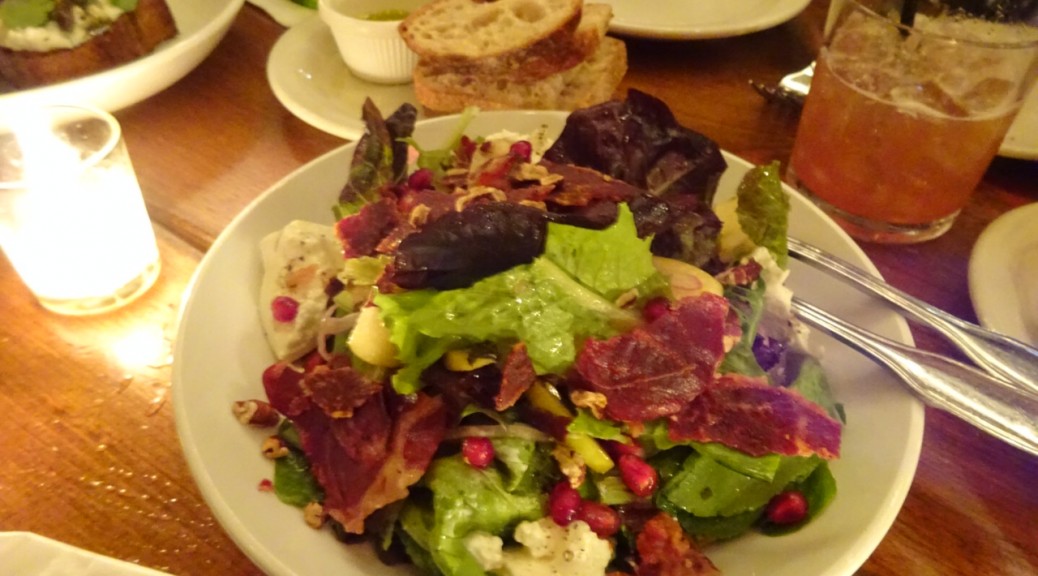 I was excited to try the restaurant FnB when I was in Scottsdale for a girls’ weekend a couple weeks ago. FnB prides itself on its “globally accented seasonal menus,” and even offers a predominantly local wine list featuring Arizona wines. Chef Charleen Badman was nominated for the James Beard Award for Best Chef of the Southwest in 2014 and 2015, and the restaurant itself has won numerous awards since it first opened in 2009.

The restaurant is located inside the charming Craftsman Court in downtown Scottsdale. It was warm and cozy, with unique art on the walls.  Our waiter encouraged us to order all of our dishes to share as a table, which was a great way to sample much of what the restaurant has to offer. Many of the dishes were hits, though there were a few disappointments. But the menu was creative and fun, and full of fresh local produce.

For drinks, many of us started with cocktails. I had an Old Fashioned, which I didn’t love. But our waiter did explain to us what a “shrub” is (fruit marinated with sugar and vinegar, then often mixed with liquor to make a cocktail). One of my friends ordered the gin-based cocktail that contained this shrub, and I could definitely taste the vinegar. I recommend sticking with wine.

The menu was one of those adorable (pretentious?) menus that just lists a bunch of ingredients (rather than naming the dish), including several international ingredients and preparations that had to be promptly Googled. Here’s a list of translations:

For appetizers, we ordered the socca, persimmon salad, grilled bread with ricotta, lamb manti, and pickled shrimp with buttered Saltines. All of these items were delicious, but the socca and lamb manti were the standout dishes from the bunch.

For entrées we shared the pasta with Brussels sprouts, pesto, and bacon as well as the corvina with chickpeas, Cara Cara oranges, and hearts of palm. Both were very strong dishes, though less unique than the starters.

We also ordered several vegetable sides to go with our entrées. We chose the “second” summer corn, which was the standout of the sides. The spaghetti squash and winter squash were good, but they felt like dishes that we could make at home. But it was clear that the produce was seasonal, local, and of very good quality.

We ordered three desserts to share as a table. The butterscotch pudding was by far our favorite, though I wish it had less whipped cream and more pudding. We also ordered the lemon verbena panna cotta which was served with oats, dried wine grapes, and pecans. It kind of reminded me of something one would eat for breakfast: yogurt with granola. I was not a fan. The persimmon cake was also a disappointment; it was too dry and tasteless. I think I was expecting something like the Lumberjack Cake from San Francisco’s Frances. Unfortunately I was wrong.

Despite the handful of disappointments on the menu, I would definitely recommend FnB to those traveling to Scottsdale, AZ. The menu is creative and they use high quality ingredients. There are apt to be a few misses when taking risks in the kitchen and changing the menu frequently with the changing seasons. I could honestly do a dinner of their delicious and creative appetizers, wash it down with some local wine, and go home happy.

One thought on “FnB”