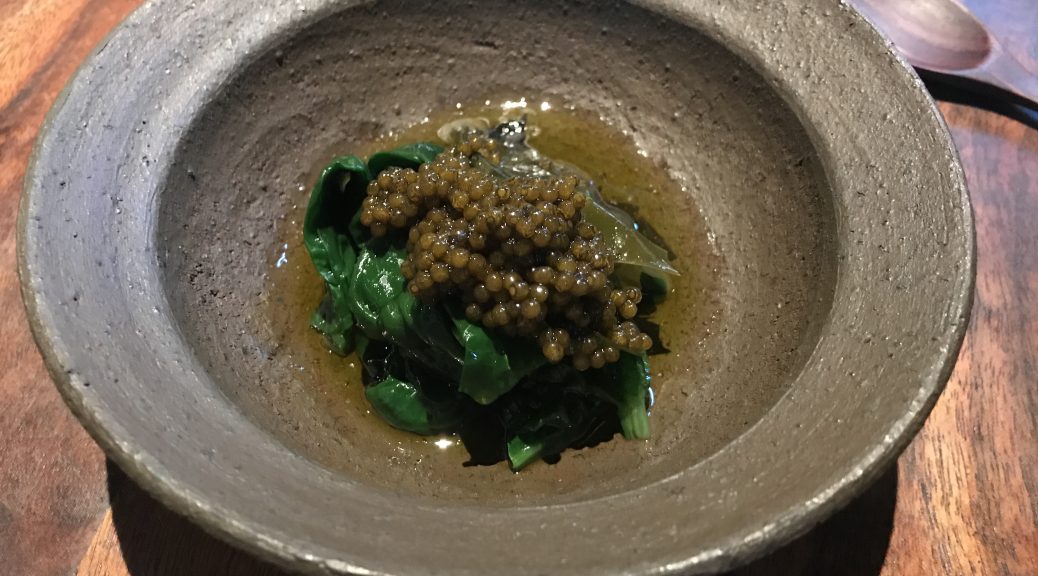 On August 11th Jack and I celebrated our five year wedding anniversary with an extravagant dinner at Saison. This Michelin 3-star restaurant started as a pop-up project in the Mission neighborhood of San Francisco seven years ago, and quickly garnered a stellar reputation. The restaurant earned its third Michelin star in 2013; it is currently ranked 37th on The World’s 50 Best Restaurants list.

Saison is located South of Market (technically South Beach), just a block away from AT&T Park. Despite being the most expensive restaurant in San Francisco, it has a very welcoming vibe. The dining room has a warm, urban feel with exposed brick and dark grey walls, leather and wood furniture, with various mounted animal heads on the walls; natural light from a large window softens the overall feel of the decor. The music playlist was a catchy mix of 70’s and 80’s rock including Fleetwood Mac, Rolling Stones, and Billy Joel. It did not feel pretentious in the slightest.

It appeared that there was only one tasting menu option at Saison (which is not posted on their website). We also opted to have the wine pairing as well. After all, it was a celebration!

Our server started us off with an herbal tea made from fresh herbs from the restaurant’s farm in Lagunitas (west Marin County). It was a refreshing palate cleanser and a nice introduction to the local, seasonal ingredients that were to come.

Our first course was the Saison private batch caviar smoked in kelp, served atop a bed of spinach cooked in seaweed butter. We were told the caviar was cured for three months. Jack and I are not caviar connoisseurs; we both enjoy caviar, but have a hard time justifying the price of what sometimes feels like glorified salt. But this dish was unlike any other caviar I’d ever had; the generous portion had a smoky flavor, and the spinach with butter was pure comfort food. This is apparently one of Saison’s standout dishes and it’s easy to see why. This dish was paired with Agrapart Brut ‘7 Crus” from Avize, Champagne, France. Caviar and champagne: a match made in heaven!

Our second course was grilled prawns with spices and lime. We were given no utensils with which to eat these crustaceans; we were encouraged to use our hands. These prawns were cooked perfectly – they were juicy and packed full of flavor (rich umami). They were served on a bed of sauce which was rich and delicious, and they had a good spicy flavor which paired well with the fresh lime. We were given warm towels to tidy up with afterwards. This was served with Dönnhoff Riesling “Oberhäuser Leistenberg” Kabinett from Nahe, Germany (2016). The subtle sweetness of the Riesling paired well with the spicy prawns.

Our third course was a delicious fresh box crab. We were introduced to a live box crab before we ate this course (his buddy?)

This was a smaller course, but it was delightfully rich and flavorful. It was served with dandelion greens for garnish. The box crab was paired with a sake called Yamada “Everlasting Roots” Tokubetsu Junmai from Gifu, Japan.

The fourth course was a collection of seasonal vegetables. We started with fresh corn mousse with clear tomato jelly on top. Next, our server brought out a bowl of roasted tomatoes. The purple items are also tomatoes, but they had been slow roasted until the sugars caramelized and they tasted sweet, similar to a sun-dried tomato but with so much more depth of flavor.

Lastly, we were served a small serving of thinly sliced zucchini curled up with some other items for flavor (which escape me now…)

After all of these beautiful, local vegetables were on the table, our server pointed out that we had just been served a “deconstructed ratatouille.” Minds = blown. This course was served with Alain Graillot Croze-Hermitage Blanc from Rhône, France (2015).

Our fifth course was barbecued quail. This was another utensil-less course. While I enjoyed getting down and dirty with some quail, it was a bit awkward grabbing my elegant wine glass with my sticky barbecue fingers… but the quail was succulent and covered in sweet barbecue goodness. It was paired with the Domaine Dominique Mugneret Nuits-Saint-Georges 1er Cru “Aux Boudots” from Burgundy, France (2014). I’m quite familiar with the Pinot Noir wines from the Russian River Valley; however, I really don’t have a lot of experience with French wines, even though that’s where these wines originated. I’m sure this is very American of me to say, but I prefer the boldness of the wines produced here; the nose of this wine was a lot more exciting than the taste.

Our sixth course was a pronghorned antelope served with grilled radicchio and flaky buttery biscuits (not pictured), followed by a steaming mug of broth made of the grilled bones (aka the popular magical elixir known as “bone broth”). You could have told me this was steak and I’m not sure I would have known any better. It was so delicious and cooked perfectly medium rare. I should point out that this dish coincided with the point in the meal where I realized that I really shouldn’t drink all of the wine paired with my meal. I took a little break from the wine to enjoy my antelope (and to allow the room to stop spinning!) I did have a few sips of the pairing: Copain Syrah “Hawks Butte” from Yorkville Highlands in Mendocino County, California (2011). The wine was delicious.

Now it was time for dessert. Just as the “ratatouille” had highlighted the summer’s bounty of vegetables, the dessert was made up primarily of fresh seasonal fruits. Saison delivered one of the most perfect dessert courses I have ever had in a fancy restaurant: it consisted mostly of fresh fruit, a scoop of ice cream, with a rich chocolatey finish. The first item that was brought out was grilled pineapple with toasted marshmallow ice cream in pineapple oil. The texture of the ice cream was creamy and more firm than ice cream, I suspect due to the gelatin (think panna cotta meets ice cream). This course was served with a dessert wine: Château de Fargues Sauternes from Bordeaux, France (2005).

Next we were served fresh, seasonal raspberries with sugar. They were sweet and tart and really highlighted the joy of summer berries.

We were then served barley tea, which had a nutty, savory flavor. Our server pointed out that our meal began and ended with tea. I often say that these fine dining experiences feel a bit like a performance (this is the only way I can justify spending these prices!) – the tea was like the opening and closing musical numbers, highlighting the seasonal ingredients, both bright and floral, as well as earthy and savory. It was a lovely ritual.

We were served two more dessert items. The first was the second most delicious piece of melon I had ever tasted, served chilled on crushed ice. (The most delicious melon I ever tasted was of a similar variety in a CSA box I received from Eatwell Farm several years ago; I ate the entire melon before Jack got home to try any!)

The meal concluded with two decadent pieces of caramel chocolate toffee (or something of the sort…) topped with gold leaf. (I wrote about gold leaf in my piece on Quince a couple years ago – it is completely edible and passes through the body without being absorbed!) I don’t normally love chocolate desserts at fancy restaurants (too rich for me), but this was perfection: crispy/salty/rich toffee on the inside, covered in a creamy caramel-like ganache. It left us feeling completely satisfied, yet not overly stuffed.

We were very pleased with our meal at Saison. The service was OUTSTANDING. We actually recognized one of our servers from our meal at Quince a couple years ago! All of the servers were polite and totally on their game, and they made a very fancy meal feel approachable and welcoming. The timing of the dishes was on point, with the exception of a slight lull before dessert, though this allowed us a bit more time to digest and discuss our savory dishes.

After a special meal like this, Jack and I always love to discuss how it compares to other tasting menus we’ve been fortunate enough to try over the years. Saison is one of six restaurants in the Bay Area that have three Michelin stars; the other five are Benu, The French Laundry, Manresa, Quince, and Meadowood. Since Quince is the only other one out of that list at which I have had the pleasure of eating, it was natural to do a lot of comparing between the two. Saison feels much more casual and approachable than Quince, and the menu has an Asian influence and really highlights seasonal fruits and vegetables. Quince feels much more fancy and high end; the menu has an Italian theme, with an optional pasta course, as well as caviar and white truffles (we were there in December). The menu at Quince did not highlight seasonal produce as much as Saison, though this could be due to us visiting in the winter.  Saison happens to be the most expensive of the local Michelin 3-star restaurants, while Quince is the least expensive. So, if I had to choose (it’s like choosing between my children!) I would say that I would recommend Quince over Saison, but seriously, YOLO – why not try both?