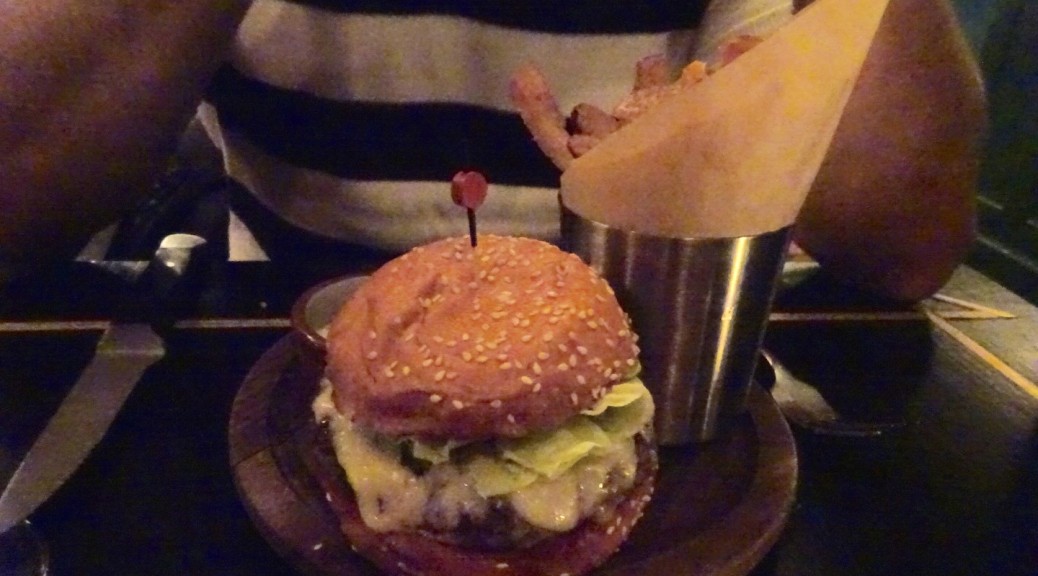 Edit 4/22/17: Apparently Cafe du Nord is no longer owned and managed by the Ne Timeas Restaurant Group and the menu and recipes have changed. Rest in peace, Best Burger in San Francisco!

Cafe du Nord first opened its doors in 1907. Located in the Swedish American Hall in the Upper Market neighborhood of San Francisco, the space previously hosted many famous musicians before they made it big (Neil Young, Spoon, and The Kinks, to name a few). In 2015, the Ne Timeas Restaurant Group (Flour + Water, Central Kitchen, Aatxe) restored the space and reopened Cafe du Nord as a bar and restaurant offering live music and food until 2am.

Jack and I moved to the Castro a year ago, and in general, we’ve been very disappointed in the food in this neighborhood. Perhaps it has something to do with its being a popular tourist destination, but the Castro is missing the density of high quality neighborhood eateries for which San Francisco in know. Aside from Frances, we’ve struck out several times on overpriced and overrated restaurants.

Then we discovered the Upper Market neighborhood, which is about a 15 minute walk from our place. We were very impressed by Aatxe, a Spanish restaurant by the same owners of Cafe du Nord; so when Cafe du Nord finally re-opened its doors over the summer, we were eager to try out the new revamped menu.

The Viking Room is the name of the restaurant inside the larger bar of Cafe du Nord. It is such a great space: dark and swanky – you feel like you are transported back to a different era when music, food, and cocktails were simpler and soulful and delicious. The cocktails are some of the best I’ve had in the city.  I ordered the Armory & Arsenal which consisted of Perry’s Tot gin, pine nut, and lemon served up. Jack had The Golden Era which was made of George Dickel rye, maple sugar, fig leaf bitters, served on a “big ass ice cube” per the menu. Both were stellar cocktails.

We were eager to try some oysters, and our server talked us into ordering the broiled oysters served Kirkpatrick style with bacon, hot sauce, and Parmesan. They were tasty, but they were quite rich and salty, and we soon realized that what we had really been in the mood for were the fresh raw oysters with mignonette sauce. But the broiled oysters would be a good option for someone who wanted to try oysters but wasn’t too keen on eating them raw.

We also split the Little Gem Caesar Salad with avocado, croutons, and grana padano (Italian cheese, similar to Parmesan). This was so delicious, but I was bummed when the kitchen fired our entrées too early and I had to set the salad aside to move onto the next course. One of my pet peeves when dining out is feeling like I’m rushed; dining is an experience, not a race. But our server noticed the mistake, apologized profusely, and treated us to two glasses of sparkling wine on the house. So all was forgiven.

For our entrées Jack had the Burger du Nord, which is served with sharp cheddar, lettuce, pickles, “secret sauce,” and a side of French fries. It was amazing; it is basically a grown-up Big Mac, which is brilliant, because my nostalgic inner child was enjoying the flavor combination just as much as my food-snobby adult self. The Burger du Nord is up there with some of the best burgers I’ve had in this city.

Since I had ordered the burger the last time I was there, I opted for the Chicken al Mattone (chicken “under a brick”) which was served with Delicata squash, mushrooms, and pancetta vinaigrette. I have a hard time ordering chicken in a restaurant because A) it’s usually really boring; and B) all chicken gets compared to Zuni’s chicken, and loses. But this chicken was pretty fantastic. It was juicy and tender, with a nice crispy crust. And the vegetables served on the side were seasoned well and cooked perfectly.

Despite the one service snafu (which was quickly remedied by our fabulous server), we had another great meal at Cafe du Nord. It’s such a cool spot – it would be perfect for a first date or a late night snack. And once the clock strikes midnight, all oysters and French champagne are half-off for “happy hour.” We definitely plan to make this one of our regular neighborhood spots.

One thought on “Cafe du Nord”