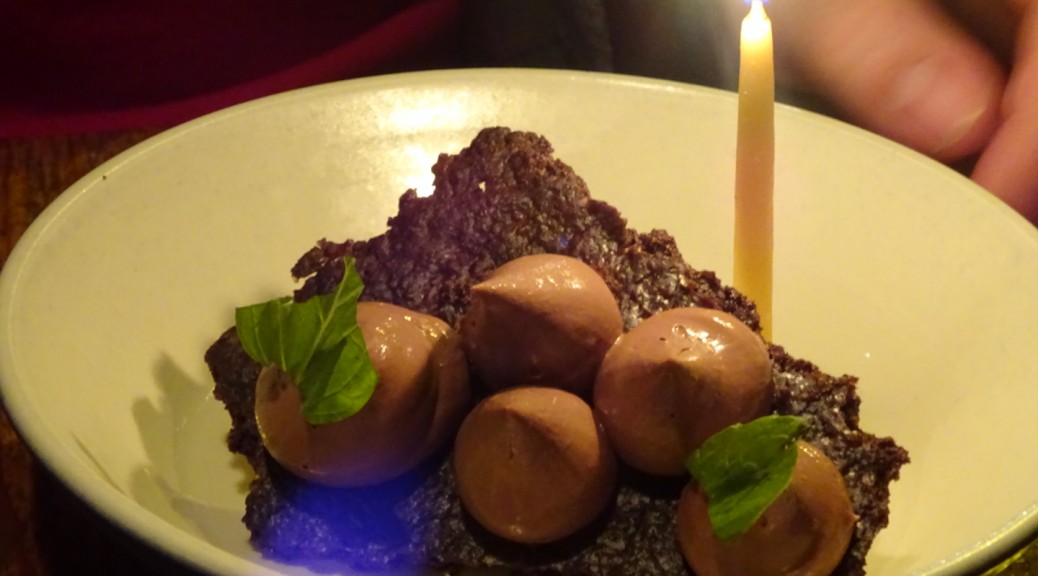 Last night I took my husband Jack to Rich Table for his birthday. We had both eaten there several times before, but he had yet to try the tasting menu. In general, we really enjoyed the food, ambiance, and service; there were a few misses on the menu, but overall it was a really good dinner. I will highlight my favorites here.

We opted for the Chef’s Picks tasting menu, which included seven courses. For most of the courses, they brought us each different items; if you don’t mind sharing with your dinner partner, this is a great way to try a lot of different items on the menu. We did not do the wine pairings, as we had brought a special bottle of wine with us. Rich Table has a full bar, so we each started with a cocktail. I had the Berber Coast (Old Tom gin, lemon, honey, and Ras el hangout, which is a spice mix from North Africa). It was very balanced: not too sweet, with a nice tang from the spices. Jack had a rye whiskey cocktail called the Dolomite, which we had fun pronouncing.

We started with a sampling of “Bites,” which included their famous dried porcini doughnuts with raclette, which did not disappoint. We also really enjoyed the oysters and savory panna cotta. One thing about Jack: there are certain items that he ALWAYS orders when they’re on the menu, and panna cotta is one of them (also: steak tartar, anything with crab, and tagliatelle with ragù).

The next course included a burrata salad and steak tartar. While I always love steak tartar, the burrata really stood out during this course. It included yellow chive chimichurri, cranberry, and black garlic. The combination of flavors of the condiments (sweet, umami), roasted potato (salty, garlicky), and the burrata (creamy, mild) was heaven. Highly recommended.

The next course included trout and roasted cauliflower. I was a bit disappointed that we didn’t get to try two fish dishes (as I did when I had their tasting menu earlier this year with a friend), but the cauliflower was delicious. It was roasted and served with tikka masala, raisins, and almonds. The Mt. Lassen Trout was served over yogurt, with grilled lettuce and beets. The fish was cooked perfectly (medium rare, crispy skin) and the grilled lettuce had a nice smokey flavor from the grill.

The pasta course included a tagliatelle (Jack’s favorite pasta shape!) with octopus, red pepper, and coriander. This one was a “miss” for us, as the roasted red pepper was a bit too sweet and overpowered the dish. But the tagliatelle was homemade and cooked perfectly. The other pasta was the standout dish of the night: a spaghetti-like pasta with a creamy sauce, chives, and roasted garlic chips. It tasted like a sour cream and onion potato chip (in a good way)! It appeared to me that this item was only available with the tasting menu (not a la carte).

We each received the same meat entrées of grilled ribeye, candied garlic, savoy cabbage, and sukiyaki broth. The steak was cooked perfectly (rare-medium rare), though it was a tad “saucy.”

After a “taste” of “Cheese Brûlée,” our desserts were a chocolate-mint concoction (mousse, cookie, ice cream) as well as a green-juice granita. Both were very good, and quite different from each other. The chocolate dessert was very rich and tasted like a Thin Mint (or some other cookie that Jack couldn’t remember the name of…) The granita came with avocado cream, brown butter ice cream, and dried stone fruit; it was light, refreshing, and very unusual. Both were quite enjoyable.

Overall, we had a fabulous dinner at Rich Table. The food is always solid, and I’ve been impressed by the service time and again. The location in Haye’s Valley makes this a great spot for an early dinner before the ballet or any show near Civic Center. I look forward to returning to Rich Table soon.

One thought on “Rich Table”