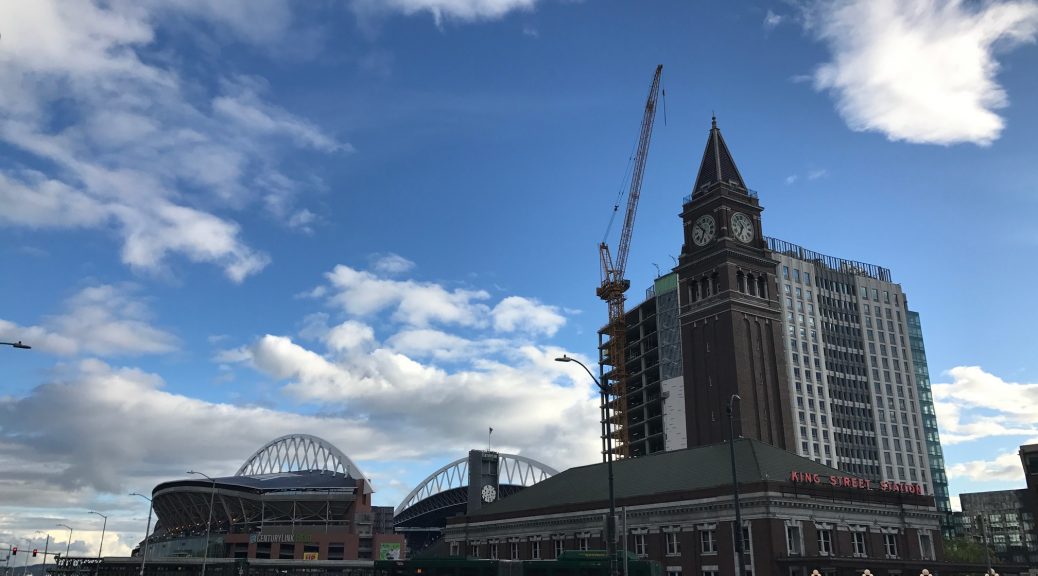 Jack and I had been wanting to visit Seattle together for some time, and we finally made it happen last month. Jack has gotten to know this city fairly well over the past couple of years, as he travels there for work frequently, and he wanted to show me around. I also have some really close friends who have settled in Seattle, and I was eager to catch up with them in person. So when my dear friend (and Seattle resident) Nicole notified me that U2 was planning a tour of The Joshua Tree album with a stop in Seattle, Jack and I quickly seized the opportunity to see this epic tour, as well as explore the Emerald City together over a long weekend in May.

We arrived in Seattle early Friday and left in the evening on Monday, giving us plenty of time to explore the city. We stayed at the Sheraton Seattle Hotel downtown, which was reasonably priced and centrally located, and allowed us to earn Starwood points (pro tip: pay to stay at Starwood properties to earn SPG points, then redeem the points at Marriott or Ritz Carlton for a 1:3 conversion). The view was pretty great too!

Once we were settled in our hotel, Jack had to finish up a bit of work, so I set out to explore the immediate area. Yelp led me to Sixth Avenue Wine Seller located just a few blocks from our hotel in the Pacific Place mall. This wine shop/bar was just what I was looking for: I was able to pick up a few bottles of local wines to bring to our friends’ places the next day, as well as enjoy a glass of Willamette Pinot Noir with a view of downtown. I even got to hold a silly pooch that was hanging out at the wine bar! What a great start to our vacation.

For dinner Jack had made a reservation at How to Cook a Wolf, an Ethan Stowell restaurant in the Queen Anne neighborhood that serves Italian-inspired small plates (and has a fantastic name!) We started with two seasonal cocktails which were delicious and balanced, and ordered Merv’s Asparagus with crispy chicken skin, hazelnut vinaigrette, cured duck yolk. We also ordered the Burrata with crispy sunchoke, sunflower seed puree, and salsa verde. Both of these dishes had a lot going on – bold flavors and a combination of textures and temperatures. They were both incredibly tasty, though the busyness of the dishes distracted a bit from the ingredients. The portions were quite large as well.

For our pasta course we ordered the Bucatini with butter, black pepper, and Pecorino Romano cheese, as well as the Gnocchi with ‘Nduja (a spicy Italian pork sausage), red pepper sofrito (an Italian sauce that usually includes garlic, onion, paprika, and tomatoes), and pork crackling (fried pork skin). We enjoyed both of these dishes, though the portions were just too big. For such simple preparations of pasta, we started to get flavor fatigue about halfway through each dish. We preferred the bucatini over the gnocchi. After the pasta, we had an order of the Pork Short Rib with smoked beet, fennel, dried cherry, and radicchio. The pork was cooked perfectly, but we were just too full to eat much of it.

We were too full for dessert, but I did go with a lovely glass of champagne cocktail (I can’t remember what was in it, but it was delicious!) We enjoyed our dinner, but next time I would definitely order fewer items.

The next day my good friend Jon had us over to his place in Capitol Hill, which was a lovely 25 minute walk from our hotel. Our friend Scott joined us with his wife Heeyoung and their two kids as well. Jon, Scott, and I became friends in 2001 when we spent a semester studying marine biology abroad in Australia. We have the kind of bond you develop when you spend hours counting various fish species on a tiny island along the Great Barrier Reef – nonsense was talked and memories were made. I hadn’t seen either of these dear friends in over five years, but we picked up right where we left off and spent much of the afternoon laughing and swapping stories.

Jon prepared carnitas tacos for us using a pig that he and a friend had apparently slaughtered (the pig’s name was “Carnitas”). It was so so delicious (I wish I had snapped a photo!) Scott also had a story of slaughtering chickens, and the whole experience felt very Portlandia to us. After hanging out on Jon’s balcony and drinking plenty of wine, we walked around the Capitol Hill neighborhood, which was lovely. We made  stop at Top Pot Doughnuts for a bacon maple bar, a glazed chocolate old fashioned, and a couple doughnuts for the kids. What a great afternoon!

That evening our friends Nicole and Marc had us over to their place for dinner. They also have two little ones, so this was an easy way for us all to hang out and eat delicious food, without having to torture the kids with a lengthy restaurant meal. It was a great chance for us to catch up with old friends, spend time with their children, and get a good feel for how their life is in Seattle.

The next morning Jack and I made our way to the Fremont neighborhood. Two of my friends in San Francisco had recommended this neighborhood as a good spot for food and shopping, so we headed over there for brunch. Nicole had recommended a place called Revel which serves “street food-style comfort food including dumplings, savory pancakes, noodles, and rice bowls.” We sat on the deck which was toasty with heat lamps protecting us from the cloudy, cool spring Seattle weather.

We started with an order of BBQ Pork Monkey Bread with pickled jalapeño and spiced maple syrup. It was tasty, though it was a little drier than I prefer my monkey bread. We decided to order two main dishes, then trade halfway through the meal, so we could try more items. We went with the Short Rib Rice Bowl with two sunny side up eggs and herbed daikon kimchi, as well as the Revel Ramen with pork belly, kimchi, and a soft-boiled egg. The ramen was definitely the hit, though it was skimpy on the pork belly. The broth was so tasty, though a tad salty. The short rib was cooked medium rare rather than the fall-off-the-bone slow cook I’m used to. It was very flavorful, though the daikon got old after a few bites – I would have preferred a different vegetables or maybe greens to balance out the rice and meat.

After brunch, we walked around the Fremont area a bit. We stumbled upon Fremont Mischief Distillery which makes whiskey, vodka, and gin. The space was cute and a bit crowded; the salesperson told us they are moving to a larger tasting room in the building soon. Jack did the spirits tasting and ended up taking home a bottle of gin. Keep in mind that the sales tax for spirits in the state of Washington is 20.5% (!!) so do the math to make sure shipping it home isn’t cheaper (in our case it wasn’t, but we had to check a bag, which I am loath to do…)

After a few sips of liquor, we decided to walk to a different neighborhood called Ballard, which we were told is the new “hot” neighborhood. On our way out of Fremont, we stumbled upon a brewery called Bad Jimmy’s. The sun had come out and it was getting warm, and Bad Jimmy’s is a great open space with plenty of fresh air and cold beer (and lots of pooches!) We enjoyed the creative concoctions such as Cocoa Vanilla Porter, Habanero Amber, and Cucumber Lime Blonde. While we were there, we observed a group a patrons on a guided brewery walking tour. Our bartender informed us that Ballard (and parts of Fremont) is teeming with local breweries, and gave us a list of his favorites to check out. We could have stayed at Bad Jimmy’s for hours trying their unique brews, but we decided to explore some other spots nearby.

We walked about ten minutes up the street to Lucky Envelope Brewing, which had been recommended by the bartender at Bad Jimmy’s. We found a spot to sit in the sun and ordered a flight of four beers to share.

We continued walking through Ballard, which offered a vast variety of restaurants, bars, and breweries. We stopped at one of the breweries (can’t remember the name) to catch the end of the Warriors’ game, then continued on our way. We stumbled upon a street market that was closing up for the day, and stopped to take in the beautiful architecture of the neighborhood.

After our adventure through Fremont and Ballard, we made our way back to our hotel to rest up a bit before the U2 concert. My friend Nicole had made an early dinner reservation at a Northern Italian restaurant called Cascina Spinasse, which turned out to be our favorite restaurant meal of the trip.

We shared a variety of Antipasti including roasted asparagus, Piselli e ricotta (crushed English peas with ricotta and lemon vinaigrette), and a dish with smoked salmon, morel mushrooms, and fava beans. Everything was fresh, seasonal, and delicious.

For the Primi course we shared two different pastas which were incredible (we enjoyed them more than the pastas at How to Cook a Wolf). The gnocchi was pillowy and light, and the tagliatelle with ragu was rich and flavorful. Both dishes were served piping hot, which is so crucial when eating pasta.

For the Secondi we shared the Bisteca: pan-roasted ribeye with caramelized onion maionese, balsamico, and roasted spring onions. The steak was seasoned perfectly and cooked to a juicy medium rare. Delicious!

After our fabulous dinner, we took a cab to CenturyLink Field in downtown Seattle. Luckily Nicole had given me the heads up that the stadium was enforcing their “Stadium Bag Policy” which restricts the size/material of purses and bags. I ended up leaving my purse at the hotel and putting the necessities in my jacket pockets. This worked out fine, but if one needed to carry more items, it would make sense to bring a clear plastic purse.

The U2 concert was incredible. I had seen them perform once before in 2000 on their Elevations tour. I had actually gone with Nicole and a couple other friends in San Diego, so it was very special to be able to see this great band perform again with my dear friend 17 years later. The Joshua Tree is one of my favorite albums of all time, and it was very moving to watch these beautiful and important songs be performed live, especially in this current political climate.

The next day I was able to meet up again with my friend Scott for a coffee, as he works downtown near our hotel. Afterward, Jack and I headed to Purple Café and Wine Bar for lunch before heading back to San Francisco. Scott informed me that this was where all the yuppies go downtown. I had a kale salad with a small brie and arugula sandwich and a glass of sparkling rosé. It was a really cool space with a spiral staircase and big windows though which to admire the lush greenery of downtown. I thought it was a great find!

We had a great time in Seattle. It was so fun for me to meet up with several of my closest friends and get a feel for their city. Jack and I really enjoyed exploring the city on foot, drinking local beers, and eating at some outstanding restaurants. The U2 concert was a magical night that I will remember forever. I hope to be back soon!