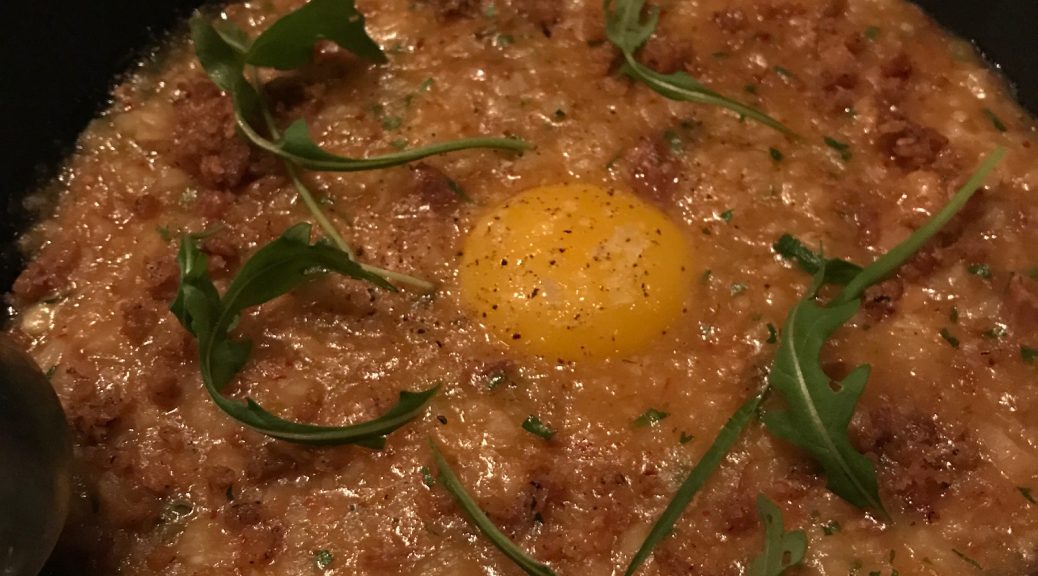 We spent Christmas last year in Los Angeles visiting Jack’s family. We opted to stay at Loews Santa Monica Beach Hotel which is located across the street from the beach near the Santa Monica Pier.  When we weren’t eating delicious Lebanese food prepared by my mother-in-law, we had the chance to explore some of the restaurants in the area surrounding our hotel. A friend of ours had previously recommended Rustic Canyon, so we decided to check it out one evening.

Rustic Canyon is a “Wine Bar and Seasonal Kitchen” owned by husband-and-wife team Josh Loeb and Zoe Nathan. This is the first restaurant opened by the couple, who went on to open several other popular spots in LA, including Cassia and Milo and Olive. Rustic Canyon prides itself on sourcing local ingredients to make up its creative, seasonal menu. Our waiter informed us that Executive Chef Jeremy Fox has an obsession with making broths and stocks bursting with rich, umami flavor, and these are incorporated into several of the dishes.

We arrived at Rustic Canyon on a rare rainy evening in LA. We each started with a seasonal cocktail to warm us up from the inside out. Jack ordered the Apple Jack Rose (apple infused bourbon, Germain Robin apple brandy, fresh lemon, honey, housemade grenadine) and I had the Gone with the Gin (Four Pillers Gin, tangerine & rosemary syrup, lime, club soda). Both cocktails were delicious and balanced, not too sweet.

We started with a seasonal salad of JJ’s persimmon, Thao’s snap peas, Fiscalini cheddar, radish, & Pizzuta almond. The salty, creamy cheese, crunchy nuts and veggies, and sweet fruit blended together perfectly. I want to try to recreate this at home!

Our second dish was steak tartare with local uni, king trumpet mushrooms, & Ori’s katsuoboshi (dried fermented/smoked fish that is shaved on top of the dish). The tartare was seasoned perfectly, and the meaty flavor of the mushrooms and katsuoboshi added a richness that greatly enhanced the the raw steak. It was served on top of fresh, crusty bread which I believe was from Milo and Olive, Rustic Canyon’s sister restaurant that has a more bakery-driven menu.

Our waiter convinced us to order the chicken & rice porridge with gribenes (crispy chicken skin), kimchi, & egg yolk, and boy were we happy he did. This was comfort food at its finest: the rich, meaty flavor of the broth used to cook the porridge was balanced with tangy kimchi, and a creamy egg yolk on top. I could eat this all day long. We also  ordered a delicious local striped bass with Thao’s yams, leeks, snap peas, & Dungeness crab broth, which I unfortunately forgot to snap a photo of. It was just as tasty as everything else we ate that night.

We decided to splurge on dessert, as everything we had ordered up to this point was outstanding, and we expected the dessert to be no exception. We picked the sticky toffee pudding with bourbon-date caramel & whipped cream, as well as a scoop of the honeycomb ice cream. Both were yummy and comforting, but the ice cream was the standout dessert: it had crunchy honeycomb candy pieces in it (light, fluffy toffee – not real honeycomb) that melted in my mouth.

I would highly recommend eating at Rustic Canyon. The ambiance was elegant and inviting, the service was impeccable, and everything we ate was scrumptious and unique. I’m already plotting my return to get more of that porridge (or another broth-based concoction). I am also eager to try Rustic Canyon’s sister restaurants as well, in hopes that they offer food of similar quality and flavor.

We also look forward to staying in Santa Monica again, preferably when it’s warm and sunny out! We were happy with Loews – the location was perfect, and it had a nice, inviting lobby in which to lounge about and enjoy a glass of wine.

We opted to not rent a car during this trip to LA (we were not eager to pay the $45 + tax daily parking fee at the hotel!) We relied on ride sharing services and cabs, as well as our feet (yes – we actually walked!) We walked to 3rd Street Promenade and Main Street Santa Monica for some quick dining options and last minute gifts, we walked to the Laemmle Theater to see a movie (Moonlight was fantastic!), and we walked along the beach and to the Santa Monica Pier. We also walked to Cha Cha Chicken for an inexpensive Caribbean meal (don’t forget to bring your own alcohol!)