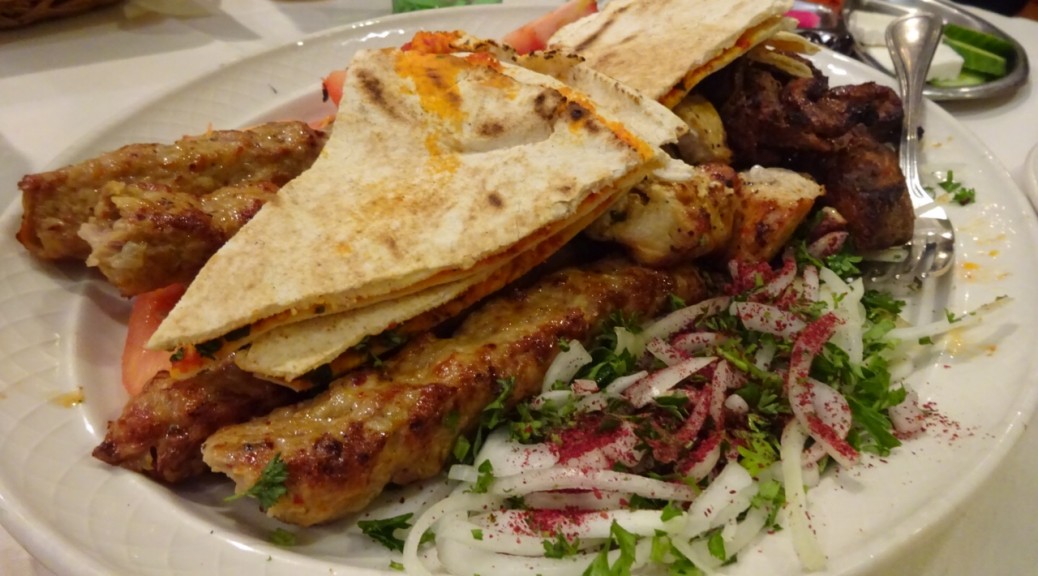 Whenever Jack and I travel to L.A. to visit his family, we always share a large family-style meal at Carousel Restaurant in Glendale. Jack’s family is of Armenian descent, spending much of their life in Beirut before they moved to Southern California when Jack was a child. They tell me that Carousel is the best, most-authentic Lebanese restaurant in the L.A. area. I can’t vouch for its authenticity, but I will say that it serves incredible food.

Carousel has two locations, one in Hollywood and one in Glendale. I’ve only been to the Glendale location, and it is a large airy space with indoor and outdoor seating. It is perfect for large groups, especially since the food is designed to be shared. The walls are decorated with ancient swords and trinkets from the Middle East, as well as photos of Lebanon.

I have never been to Beirut, but it is where Jack was born and where his parents grew up. Jack’s mom speaks so fondly of the Beirut she once knew before she left in the late 1970’s. She grew up speaking French, as Lebanon was mandated to France after World War I, which lasted until Lebanon gained its independence in 1943. She experienced Beirut as “the Paris of the Middle East,” as it was often called prior to the Lebanese Civil War (1975-1990). She describes a city where intellectuals would sit outside at sidewalk cafés and discuss politics and culture, where people of all walks of life, of different cultures and religions once lived harmoniously. I hope that, for her sake and for that of so many others, Beirut will once again find this peace and harmony, and I hope to one day visit with Jack.

On this recent visit to Carousel we ordered the Hafleh Beiruti family style feast, which included the following:

As usual, this meal at Carousel was delicious and we left full and happy. My favorite items are the meza dips and spreads (hammos, mutabbel, and muhammara), as well as the crispy cabbage salad. I also really love the meat kebabs on the tomato pita bread topped with onions, tomatoes, and that delicious garlic sauce. I finished with just a couple bites of dessert (which were very sweet and creamy) and rich Turkish coffee.  I look forward to returning to Carousel for another delicious Lebanese meal the next time we visit L.A.